Pasta’s back on the menu

If you’re dieting and trying to lose weight, whether you’re on the Dukan diet, the GI diet or the Atkins diet, pasta is almost always off limits. Nutritional experts may now have to have a re-think however as September sees the launch of a product from Australia that promises to put pasta well and truly back on the menu…

Slendier is Australia’s leading brand of ‘konjac pasta’ and has already become established as a firm favourite with those looking to lose weight around the globe. Now for the first time it is available on UK shelves and hopes to revolutionise the way we view pasta in this country.

Konjac is an unusual vegetable that can grow up to 25 centimetres in diameter and is a dietary staple throughout many Asian countries.

First and foremost the pasta created by Slendier is amazingly low in calories – 100g of their pasta contains just 8 calories, as opposed to around 300 calories for the real thing.

But a food being low in calories won’t help you slim if it leaves you feeling hungry and likely to reach for the biscuit tin. This is where Slendier pasta really stands out from the crowd and is different to most other low calorie foods. Slendier acts as an appetite suppressant because konjac is particularly high in fibre and has a strange ability to thicken and expand in the stomach, keeping you feeling full and satisfied despite a lack of calories; truly putting it in a league of its own when it comes to diet foods.

Throw in the fact that Slendier pasta is organic, gluten and fat free, studies have indicated it may have other health related benefits, it takes one minute to prepare and when added to sauce tastes just as good as the ‘real thing’ and it begins to sound too good to be true. There are however thousands of men and women who are ready to testify otherwise; including co-founder of the brand Ray Haven, who lost almost a stone and a half of weight whilst using the pasta.

Slendier pasta launched in October in selected health stores and comes in five different formats, all of which are organic – angel hair, fettuccine, rice, spaghetti and noodles. 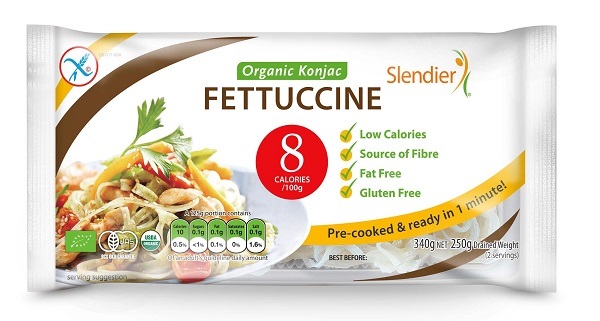