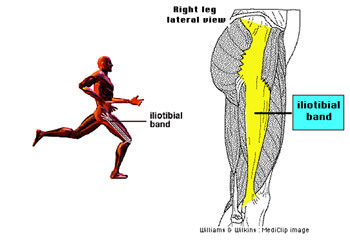 The Iliotibial band is a connective tissue band that runs down the lateral aspect (outside) of the thigh.  It is a continuation of the tendinous partof the tensor fascia lata muscle and provides its attachment to bone.

In summary, the Iliotibial band runs down the outside of the leg between the top part of the hip and the upper tibia (shin bone).

Pain is likely to be aggravated by: