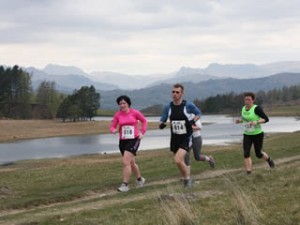 Trail running is a variant on running that differs markedly from road running and track running. Trail running generally takes place on hiking trails, most commonly single track trails, although fire roads are not uncommon. A distinguishing characteristic of the trails is that they are often inaccessible by road except at the trail heads. The trails tend to traverse varying terrain; hills, mountains, deserts, forests, and narrow passages are common. Likewise, steep inclines or rough terrain sometimes may require hiking or scrambling. Runners participating in trail runs must often descend these same steep grades. It is not unusual for trail runs to ascend and descend thousands of feet.

There are as many variations of trail running as there are runners. Many individuals prefer running trails for daily training and exercise, while other trail runners spend weeks out in the backcountry. There is a growing number of people participating in solo backcountry trail running trips, which are a sort of ultralight backpacking. While an ordinary backpacking expedition may last for eight days, averaging eight to ten miles per day, with participants carrying fifty to sixty pound backpacks, backcountry trail runner will do the same trip in three to four days, covering much greater distances each day, and carrying only minimal equipment. This type of backpacking is rare, as it is very difficult and dangerous, but it is growing in popularity.

In the United Kingdom, the British Athletic Federation authorised this definition in 1995:

“In the context of athletics, trail races are primarily along footpaths and bridlepaths marked on Ordnance Survey maps as “public rights of way”. They are “highways” to which pedestrians have unrestricted access in English law. Towpaths, forest drives, farm cart tracks and paths in parks etc, from which motorised traffic is excluded, are also trails when the owners’ permission is obtained.”

Some trail races take place in less isolated areas, and routes can include public parks or canal towpaths.

What is the TRA? The Trail Running Association (TRA) promotes trail running in the UK. By joining the TRA you will meet others who enjoy trail running, and find out about trail running events all over the country.

How does it help race organisers? The TRA is an associate member of UK Athletics (UKA). Through this association with UKA, the TRA is able to issue permits to race organisers on behalf of UKA. The TRA has also published “A guide to organising trail races”.

The TRA also publishes a quarterly magazine called Trailrunner, organises the Ridgeway Challenge, and promotes the TRA Series. Explore this site for more information on the TRA and trail running.

Thanks to: www.trailrunning.co.uk for the image in this article.