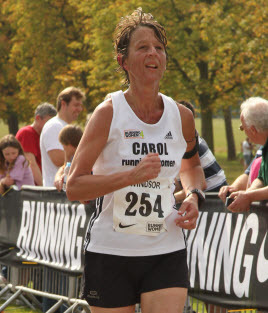 A Very Personal Story of Courage

The story of an everyday woman … if it inspires just one person it will have been worth sharing. 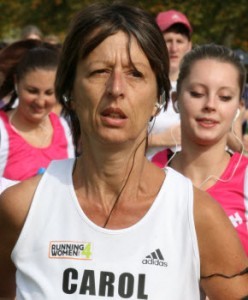 My name is Carol, married, mum of two and heading for my big half century in 2012!  I have been running for about 7 years now and a member of R4W for most of that time.  I started running because I kept thinking “I wonder if I could?” and, having started, wished I had done so many, many years ago!   I love running – it’s my “me” time, time to think about life and look back on how my life has changed over the last few years.  It is this story,that started in August 2005, that I would like to share with you.

In October 2005 I took part in the Great South Run, running for the World Cancer Research Fund.  At that time I had never really had to face cancer in my family, or amongst friends.  Little did I know ….

In the August of that year I had visited the doctor as I was experiencing some unusual bleeding: he referred me to hospital.  In February 2006 I had a polyp removed from my bowel, a CT scan and, two days before my 44th birthday in March was given the news no-one wants to hear. The polyp showed cancerous changes.  Cancer had crossed my mind but to be told is  different.  I lurched from tears to well, its happened, lets deal with it, to “why me?”  I don’t drink or smoke, eat reasonably healthily and am fit.  I would need an MRI scan and an operation to remove the part of the bowel that the polyp was attached to – it would take me about 8 weeks to recover.  I would also have to wear a colostomy bag during my recovery, which filled me with dread.

And this only about 5 or 6 weeks pre-London Marathon, for which R4W had given me a club place, and which I had been so excited about.  Liz Yelling,Olympian, had become a close friend, as she was helping to train me and two other club members who had been given places.

My consultant told me I was very fit and young to have to go through this but it would be like an insurance policy, to make sure everything was gone.  This did not have to stop me running – it would help me to recover quickly if I stayed fit.  My husband supported me in my decision to carry on running.  I wasn’t ready to quit so why stop?  It made me more determined.  I wanted to do the Marathon and had a couple of other races booked before then.  I did a 10K in March, another in April and kept up my regular training.

My family and friends at work were fantastic and ran the Battersea Race for Life in my honour.  I was truly humbled by what people were willing to do for me.

I was asked many times how I kept cheerful, how did I keep going? It was very hard.  But you can’t give up, especially when you have children – I have a son and a daughter, and the most wonderful husband in the world.

I saw my consultant on 18th April, less than a week before FLM.  I set my mind to doing FLM and wanted to hang on to my precious marathon place.

But, try as I could, the day before, packed and ready to go to London, my courage deserted me.  I went to pieces.  My family did their best to make me believe I could do it but my self-belief had gone, shattered I guess by the pressure of the past weeks.   My disappointment was total.

Enough was enough.  NO MORE FEELING SORRY FOR MYSELF! I needed a new goal, to regain my self-belief.

A friend told me she was doing a half-marathon in Richmond on 14th May, 2006 so I decided to join her.  It was my first half-marathon and I finished in about 2:18.  The strength and belief it gave me back was immeasurable.  It gave me the strength to believe I could achieve whatever I wanted.

My operation was booked for 24th May, our wedding anniversary.  I would then have to wait about 10 days for the results of the biopsy …!

Next time – my recovery and my impatience and frustration at wanting to get back to running!